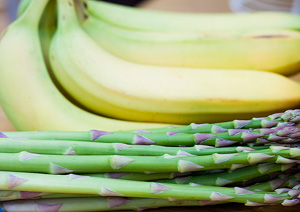 Are you eating enough fibre?

Are you eating enough fibre?

This is a question put to me many times as a child by my Grandmother but it was worded slightly differently. ‘Are you getting enough roughage? Fibre, roughage or prebiotic whatever you call them it is all the same thing, but as a nation our daily intake is well below that of our ancestors. Archaeological evidence reveals that prehistoric hunter-gatherers may have consumed around 135grams of fibre daily. However, the figures for the UK are rather appalling with an estimated 18.7g being consumed on a daily basis, which is well below the recommended 30g.
It is not just the amount but the diversity of fibre sources consumed that are important modulators of our gut microbiome (Bacteria). Probiotics have in recent years been the go to choice to improve digestive health, however, we now know that their effect is transient and prebiotics are now emerging as a more sustainable option.  Non-digestible fibre is able to reach the large intestine essentially in-tacked, where it is fermented by bacteria in order that it can then perform various functions.

As the name Prebiotics suggests it is the starting point and they are often described as the ‘fertilisers’ for our beneficial bacteria.  But why are they important and how are they beneficial to our health?

There is a mountain of information and research promoting the importance of our microbiome, or gut bacteria and prebiotics such as Fructo-oligosaccharides can increase Lactobacilli as well as decrease Escherichia Coli and Inulin and resistant starches have been found to stimulate growth of Bifidobacterium, with resistant starches also increasing Lactobacillus and reducing Clostridia species. Keeping a good balance of the beneficial bacteria is just as important as decreasing pathogenic species.

In the process of fermenting the prebiotics, useful metabolites are produced including Short-chain fatty acids (SCFA’s) which help to lower the intestinal pH which in turn inhibits the growth of pathogenic microorganisms.  A specific SCFA Butyrate plays an important role in the integrity and health of the gut lining, vital, as the gut is an essential barrier with the outside world.  Damage to the gut lining can cause toxins and antigens to enter systemic circulation, potentially leading to inflammation and autoimmunity.

Our innate immune system is supported and modulated from birth with the presence of Galacto-oligosaccharides in breast milk and arabinogalactans have also been found to play an important role in our immune defence and a clinical study has found that therapeutic dosage showed a decreased incident of cold by 23% and promoted quicker immune response against infection.

There are many ways in which prebiotics can help with weight management and diabetes, as apple pectin and beta-glucans can lower LDL cholesterol and inulin has been shown to improve satiety post meal and lower fasting blood glucose and insulin levels.  Inulin has also been shown to reduce fat deposits in the liver, muscle and pancreas in people who are prediabetic.

The body’s process of dealing with and eliminating Oestrogen metabolites is for the liver to package them as a safe molecule and move them into the gut for elimination in bile.  Prebiotics play a few roles in supporting this process by improving gut transit time and therefore elimination, plus they also lower the activity of an enzyme that is produced by some opportunistic gut bacteria which can break up the safe molecule and force the recirculation and subsequent elevation of oestrogen.  Oestrogen dominance symptoms include:

How do you get more fibre into your diet?